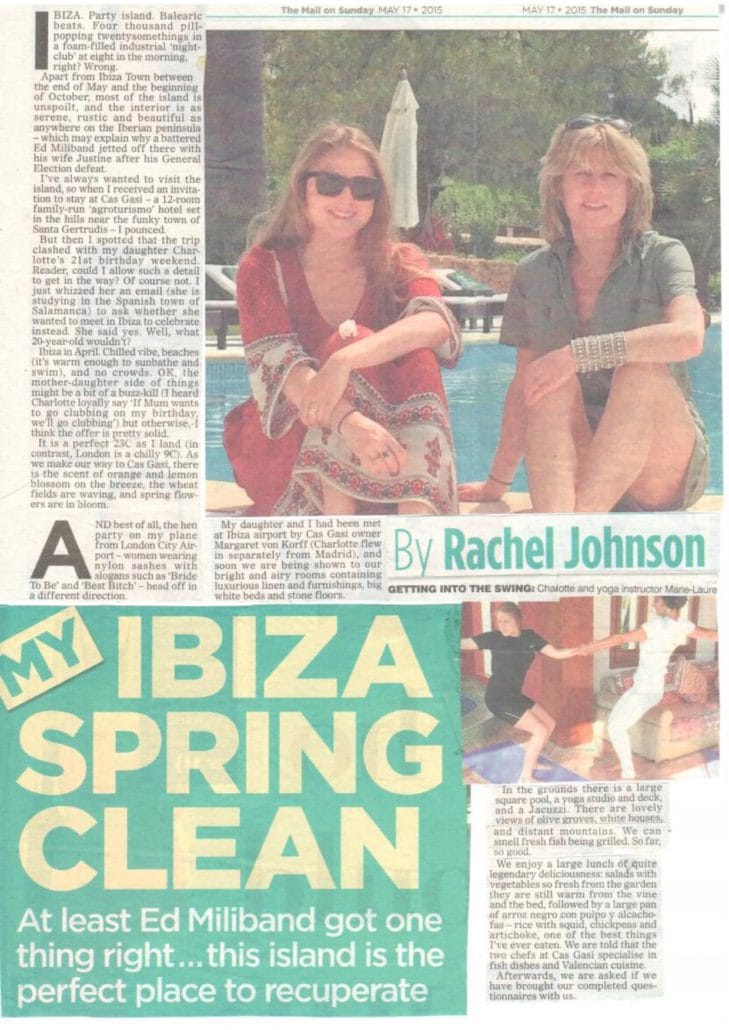 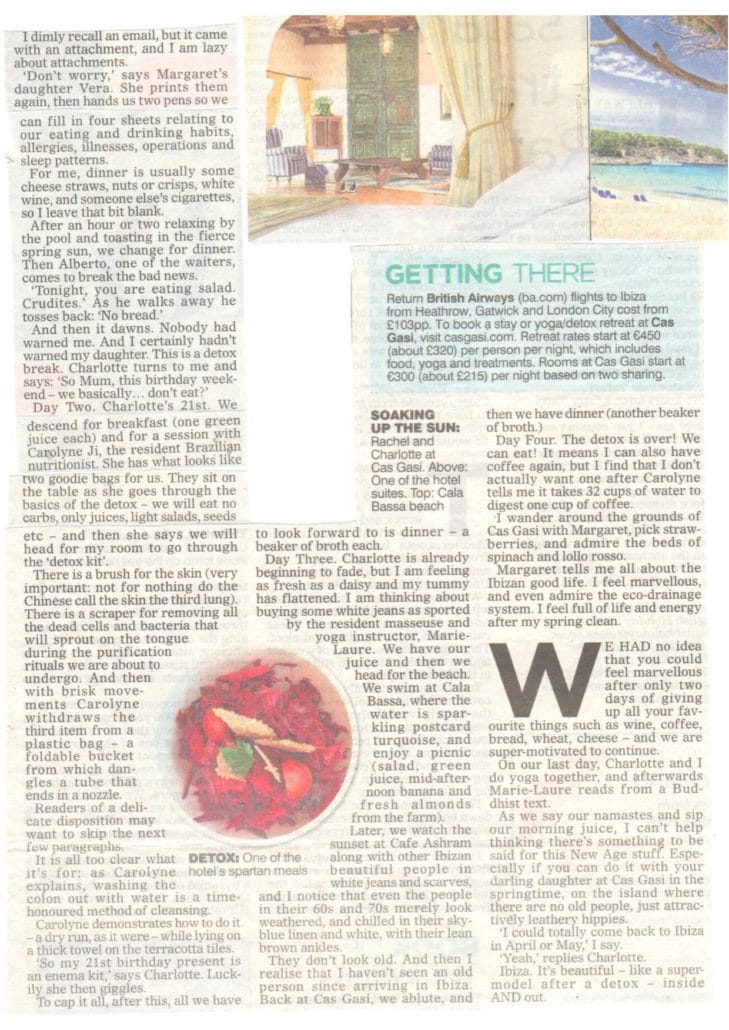 The Mail on Sunday

Apart from Ibiza Town between the end of May and the beginning of October, most of the island is unspoilt, and the interior is as serene, rustic and beautiful as anywhere on the Iberian península – which may explain why a battered Ed Miliband jetted off there with his wife Justine after his General Election defeat.

I’ve always wanted to visit the island, so when I received an invitation to stay at Cas Gasi – a 12-room family-run ‘agroturismo’ hotel set in the hills near to the funky town of Santa Gertrudis – I pounced.

But then I spotted that the trip clashed with my daughter Charlotte’s 21st birthday weekend. Reader, could I allow such a detail to get in my way? Of course not. I just whizzed her an email (she is studying in the Spanish town of Salamanca) to ask whether she wanted to meet in Ibiza to celebrate instead. She said yes. Well, what 20-year-old wouldn’t?

Ibiza in April. Chilled vibe, beaches (it’s warm enough to sunbathe and swim), and no crowds. Ok, the mother-daughter side of things might be a bit of a buzz-kill (I Heard Charlotte loyally say ‘if Mum wants to go clubbing on my birthday, we’ll go clubbing) but otherwise, I think the offer is pretty solid.

It is a perfect 23ºC as I land (in contrast London is a chilly 9ºC). As we make our way to Cas Gasi, there is the scent od orange and lemon blossom on the breeze, the wheat fields are waving and spring flowers are in Bloom. And best of all, the hen party on my plane from LondonCity Airport – women wearing  nylon sashes with slogans such as ‘Bride to be’ and ‘Best Bitch’ – head off in a different direction.

My daughter and I had been met at Ibiza Airport by Cas Gasi owner Margaret von Korff (Charlotte flew in separately in from Madrid), and soon we are being shown to our bright and airy rooms containing luxurious linen and furnishings, big White beds and Stone floors. In the grounds there is a large square pool, a yoga studio and deck, and a Jacuzzi. There are lovely views of olive groves, White houses and distant mountains. We can smell fresh fish being grilled. So far, so good.

We enjoy a large lunch of quite legendary deliciousness: salads with vegetables so fresh from the garden they are still warm from the vine and the bed, followed by a large pan of arroz negro con pulpo y alcachofas – rice with squid, chickpeas and artichoke, one of the best things I’ve ever eaten. We are told the the two cooks of Cas Gasi specialise in fish dishes and Valencian cuisine. Afterwards we are asked if we have brought our completed questionnaires with us. I dimly recall an email, but it came with an attachment, and I am lazy about attachments.“Don’t worry”, says Margaret’s daughter Vera. She prints them again, then hands us two ens so we can fill in four sheets relating to our eating and drinking habits, allergies, illnesses, operations and sleep patterns.

For me, dinner is usually some cheese straws, nuts or crisps, White wine, and someone else’s cigarettes, so I leave that bit blank. After an hour or two relaxing by the pool and toasting in the fierce spring sun, we change for dinner. Then Alberto, one of the waiters, comes to break the bad news.

“Tnight, you are eating salad Crudités”. As he walks away he tosses back:”No bread”. And then it dawns. Nobody had warned me. And I certainly hadn’t warned my daughter. This is a Detox break. Charlotte turns to me and says: “So, Mum, this birthday weekend – we basically… don’t eat?”

Day Two. Charlotte’s 21st. We descend for breakfast (one Green juice each) and for a sesión with Carolyne Ji, the resident Brazilian nutritionist. She has what looks like two goodie bags for us. They sit on the table as she goes through the basics of the detox – we will eat no carbs, only juices, light salads, sedes etc. – and then she says we will head  for my room to go through the ‘detox kit’.

There is a brush for the skin (very important: not for nothing do the Chinese call the skin the third lung). There is a scraper for removing all the dead cells and bacteria that will sprout on the tongue during the purification rituals we are about to undergo.  And then with brisks movements Carolyne withdraws the third ítem from a plastic bag – a foldable bucket which dangles a tube that ends in a nozzle. Readers of a delicate disposition may want tos kip the  next few paragraphs. It isa ll to clear what it’s for: as Carolyne explains, washing the colon out with wáter is a time-honoured method of cleansing. Carolyne demonstrates how to do it- a dry run, as it were – while lying on a thick towel on the terracotta tiles.  “So my 21st birthday present is an enema kit”, says Charlotte.Luckily she then giggles. To capi t all, after this, all we have to look forward  to is dinner – a beaker of broth each.

Day Three. Charlotte is already beginning to fade, but I am feeling as fresh as a Daisy and my tommy has flattened. I am thinking about buying some white jeans as sported by the resident masseuse and yoga instructor Marie Laure. We have our juice and then we head for the beach.  We swim at Cala Bassa, where the wáter is sparkling postcard turquoise, and enjoy a picninc (salad, Green juice, mid-afternoon banana and fresh almonds from the farm). Later, we watch the sunset at Café Ashram along with the other Ibizan beautiful people in White jeans and scarves, and I notice that even the people in their 60s and 70s merely look heathered, and chilled in their sky-blue linen and White, with their lean Brown ankles.  They didn’t look old. And then I realice that I haven’t seen an old person since arriving in Ibiza.

Back at Cas Gasi, we ablute, and then we have dinner (another beaker of broth).

Day Four. The Detox is over! We can eat! It means I can also have coffee again, but I find that I actually don’t want one after Carolyne tells me it takes 32 cups of water to digest one cup of coffee.

I wander around the grounds of Cas Gasi with Margaret, pick strawberries, and admire the beds of spinach and lollo rosso. Margaret tells me all about the Ibizan good life. I feel marvellous, and I even admire the eco-drainage system. I feel full of life and energy after my spring clean.

We had no idea that you could feel marvelous after only two days of giving up all your favourite things such as wine, coffee, bread, wheat, cheese – and we are super-motivated to continue.

On our last day, Charlotte and I do yoga together, and afterwards Marie Laure reads from a Buddhist text. As we say our namastes and sip our morning juice, I can’t help thinking there’s something to be said for this New Age stuff. Especially when you can do it with your darling daughter at Cas Gasi in the springtime, on the island where there are no old people, just attractive leathery hippies.

“I could totally come back to Ibiza in April or May”, I say. “Yeah”, replies Charlotte. Ibiza. It’s beautiful like a super-model after a detox –  inside  AND  out